When my husband first broached the subject of taking a job abroad and moving the family from the UK and out to the Middle East I never really imagined that would be what we would actually end up doing! Being a not particularly adventurous type of person who was more than happy with my suburban Surrey life, the idea of such a huge upheaval actually seemed nothing more than ridiculous. However, I thought I would humour my other half as he contemplated the matter and, before I could blink twice (well 7 months later actually), found myself buckled into a plane seat with our (then) three children about to start out on a bigger adventure than I could ever have imagined.

Obviously the logistics of such a big move were a little more complicated than perhaps I have led you to believe! Important questions had to be answered about why this job opportunity was too good to turn down and what we as a family would stand to gain from such a drastic move...and what we would lose by being so far away from our family and close friends. Where would we live once we got there, where would the children go to school and would they be as good as their schools in the UK? Would the quality of life be better for us? What would we do with our UK home - rent it out or leave it empty? And so the questions continued to be asked until, following a short 3 day trip to Doha, with my husband, and in a moment of daring, I said 'yes, let's do it!'....and then promptly changed my mind again the next week!!!

I must obviously have agreed to it again at some point as Simon flew out here to start his new job on 22nd July 2011 while I remained at home with the children and a long list of things to organise before we joined him (wasn't too happy about item no. 20 on Si's list of things to do - 'disconnect the car battery' - not the type of thing I claim to be very good at so thank you  Dad for stepping in to help!).

We had previously shipped a 40ft container of furniture and belongings for our new villa at the end of June, with the hope that Si would take possession of it before the kids and I flew out late in August and luckily the timing worked well, even with it sitting in Doha port for 2 weeks awaiting customs clearance. And so that is how it came to be that on 25th August 2011 (just one day before Matthew's 5th birthday), we found ourselves moving to what was to become our new home abroad for the very first time.

For stories about what happened next in our big adventure overseas feel free to check out the rest of the website. 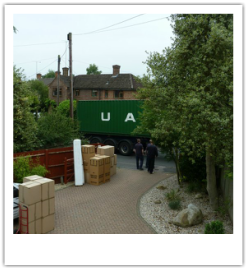 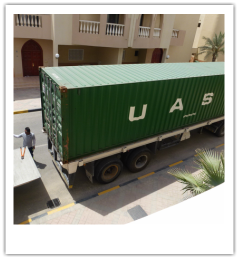 ...and arriving in August at our Villa in Doha, Qatar 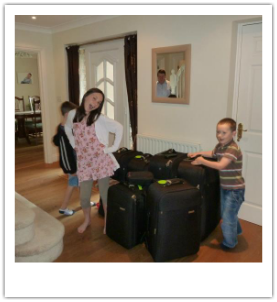 Leaving our UK home on 25th August 2011
Powered by